Home / Explore / Tonnay-Charente, the river port
-A +A

Stroll along the docks of Tonnay-Charente and explore its historic center up to the Suspension Bridge !

The commercial port during the golden age of cognac

On the left bank of the Charente river you can find Tonnay-Charente, a big commercial port during medieval times. The transport of goods was abundant and the “Gabarres” (flat bottomed boats) were often seen carrying brandy barrels at the time when trade flourished.

It was a commercial port but also a port of distribution where ships from the high seas discharged their cargo due to the depth of the Charente. Smaller boats then took over the delivery task, but you may imagine the taraffic on the river traffic with sometimes over 150 “gabarres” occupying the waters !

Stop on the historic docks of Tonnay-Charente

Walk along the restored docks and discover the facades of the offices and the old trading houses.

Follow the marked trail of the Tonnacquois heritage and admire the remnants of the ramparts of the old fortified castle, the church of Saint-Étienne, the beautiful mansions with colorful shutters, the old cellars, the fountains, the wash house, the renovated hall which has become a cultural space that hosts concerts, shows and exhibitions.

The Suspension Bridge : a panorama filled with history

Walk on the Suspension Bridge of Tonnay-Charente, a giant classified Historic Monument, from where you'll see the roofs of the beautiful mansions, the docks and the surrounding countryside. You can even see the Transporter Bridge from afar !

On the other side of the Charente, experience the tranquility of the marshes where horses and birds live. Here, the landscapes change constantly with the seasons and tides. Each stroll is a new discovery.

Two days to celebrate the past and the riches of this river port. For two days, the docks of Tonnay-Charente become the playing field of many shows : aerobatics, street arts, concerts... You'll even find a market filled with local produce !

The inhabitants take fully part of this event and present ancient trades such as boat restoration, seamanship, cooperage … Maybe you will be tempted by the Cognac fair or maybe you will want to try out regional products at the market.

The day will go on with a giant picnic and exhibitions, water sports and activities and to end the festivities, why not stay for the fireworks ! 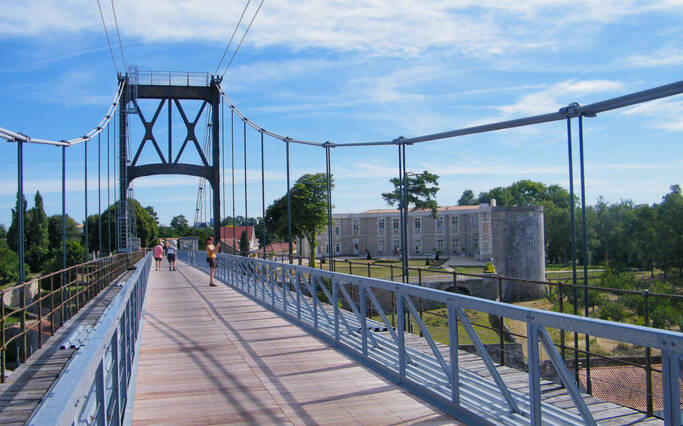 Walk or enjoy a bike ride in Tonnay-Charente, on one of the oldest Suspension Bridge in Europe!